It's mystery and nature's own magic how those small specs and dots fall into the earth and before you know it, spinach, lettuce, herbs, carrots, zucchini, pumpkins and radishes are all over the place.
Spring planting is just around the corner, so now is the time to sort out the old seeds and order new ones.

Can I use last season's left-over seeds?
While some plant varieties will produce seeds that will last for centuries, they are generally the exception. Anasazi beans collected from the cliff dwellings in southwestern Colorado that were planted soon after discovery were good to grow.
Beans, grain and corn are generally longer-lived than other plants--but their hybridized versions we use predominately today don't have a prolonged shelf-life. Best rule of thumb is to check the expiration date on old seed bags and toss expired seeds.

If you have left-over seeds from past seasons that are questionable, you can check them out with a pre-season germination test. Plant a couple seeds of each variety indoors now in a sand/peat mix. If they don't germinate, don't waste your time with them later outdoors.
Planting old seeds that don't germinate can cost you two to three weeks of outdoor growing time before you know the seeds failed and you need to replant. That's time you don't want to lose in Colorado's growing season.

Can I use seeds harvested from last year's garden?

The next generation of seeds from hybridized plants is generally less reliable than the fresh seeds you can buy. Also, as plants cross-pollinate with other garden plants, the mixed-up results land in the seeds.
For example, if you plant seeds from last year's huge pumpkin that grew next to the zucchini, the fruit that grows this year from those seeds may be a surprise. It may not look anything like last year's prize pumpkin. That's part of the magic that matters when you select seeds.

Heirloom varieties are the old-favorite plants that go back many years, some to Colonial days. Heirlooms have been collected and maintained for generations and have not been hybridized. These seeds can be collected for future seasons and will remain true to the original plant as long as they have not cross-pollinated with another variety in the garden. To keep heirlooms going from plant to seed to plant, season after season, keep them isolated from non-heirlooms.

How much and when to order?

For most home gardeners, one or two seed packets per variety are all you'll need. To have the best selection in seeds, place your order soon. Popular varieties will sell out, so be an early bird if you want to catch the best seed.


Tip of the Week reprinted courtesy of Associated Landscape Contractors of Colorado (ALCC) of which Foothills Landscape Maintenance, LLC is a member. ALCC is the only only professional organization for Colorado's landscape contracting industry statewide. Tip of the Week is copyrighted by Associated Landscape Contractors of Colorado and may be forwarded or copied by its members provided proper credit is given to ALCC
Posted by flmcolorado-Landscape Maintenance at 8:24 AM No comments:

Not the sharpest shovel in the shed?

Get ready to dig! 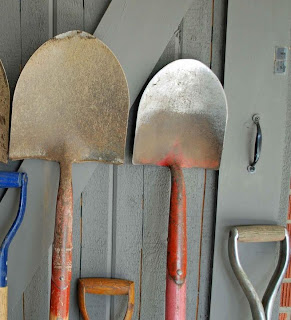 The snow's melted. The sun came out. Temperatures are rising and we die-hard gardeners have got a hankering to get outside and do something!

Like race-car drivers trembling at the starting line, we're waiting to hear our own version of "Drivers: start your engines!"

Downshift. The best we can say right now is, "Gardeners: sharpen your shovels!"

If your favorite shovel in the shed isn't sharp, now really would be a fine time to get after it. Planting time will be here in a couple months and you will feel good knowing your tools are ready to go.

These are the supplies you will need:
Remove all rust before sharpening the blade of a shovel or hoe. Because rust shortens the life of garden tools, it's always best to keep implements rust free. Wipe off the worst grime with a rag and use steel wool to scrub off the rust. Then wipe down both the metal tool and wooden handle with mineral oil.Sharpen the blade using the metal file. For really dull blades, you may need to take them to a lawnmower repair shop or a store that rents small equipment where they can use a grinding wheel to restore the sharp edge. During the gardening season, use the file on a regular basis to maintain sharpness. All tools perform best when they are sharp.

While you're at it, check out the handles. Using tools with damaged handles is a safety hazard. If the tool head is in good condition, you can replace just the handle. Fiberglass handles are a nice option for replacements because they are more durable than wood and won't put splinters in your hands. If you don't have the time or inclination to replace handles yourself, check with a local rental store as often, they are set up to provide this service.

Revving up: This month, tools are clean. Next month, garden shows open statewide. Month after that, grab sharp shovel and staaaaaart digging!

Tip of the Week reprinted courtesy of Associated Landscape Contractors of Colorado (ALCC) of which Foothills Landscape Maintenance, LLC is a member. ALCC is the only only professional organization for Colorado's landscape contracting industry statewide. Tip of the Week is copyrighted by Associated Landscape Contractors of Colorado and may be forwarded or copied by its members provided proper credit is given to ALCC
Posted by flmcolorado-Landscape Maintenance at 1:56 PM 1 comment:

Tuck plants in for a cold winter nap 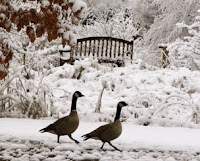 When the temperature bottoms out, many plants fall into such cold, hard times they don't bounce back. Before the temps hit sub-zero this weekend, however, there's still time to give these plants the TLC they need to survive the bitter cold.

Start by grabbing hold of Saturday to water the lawn one more time. Give plenty of water to slopes and south and west facing areas because these will be the driest areas. This moisture is not only good for the sod, but will also deal with mites that thrive in dry turf. Moisture is one of the best and easiest remedies for these pests. After watering, remember to un-hook the hose.

Next job: seek out your most tender plants to give them extra protection against the cold. Bear in mind that many of our low-water plants that thrive in the dry summer may not be cold hardy in near-zero temps.

To protect these plants, mulch the bases either with straw or shredded wood mulch. Straw and shredded mulch are loose and fluffy and less apt to create the wet and soggy conditions we need to avoid.

Common landscape plants to protect include:

• Grapes which need protection from the root crown and to about 18 inches up the canes. Because the mulch will be stacked high, wrap the pile with burlap to hold it in place.
• Other perennials such as: pansies, roses--including Meidiland and miniature roses, mums of the less cold-hardy varieties, hibiscus and some penstemon.
• Non-native or less hardy ornamental grasses such as Mexican feather grass, northern sea oats, Japanese forest grass, blood grass and pampas grass also need mulching, but the grasses will need to be cut down to about 6 to 12 inches before applying the mulch. Cover the mulch with burlap to keep it in place.

More about grasses. The more cold hardy grasses common in our landscapes include Karl Foerster and native grasses such as blue avena, blue fescue, little blue stem and switch grass. They are generally left uncut during the dormant season to provide winter interest. However, if grasses get broken down by heavy snow, you may need to be cut them back before spring.

Enjoy your Saturday outdoors before the deep freeze hits. As the thermometer drops, take heart in knowing that temps around zero eliminate certain landscape pests we're better off without. There's a warm silver lining in that cold, gray cloud!

Tip of the Week reprinted courtesy of Associated Landscape Contractors of Colorado (ALCC) of which Foothills Landscape Maintenance, LLC is a member. ALCC is the only only professional organization for Colorado's landscape contracting industry statewide. Tip of the Week is copyrighted by Associated Landscape Contractors of Colorado and may be forwarded or copied by its members provided proper credit is given to ALCC
Photo courtesy David Winger Landscape Photography.
Posted by flmcolorado-Landscape Maintenance at 2:23 PM No comments: